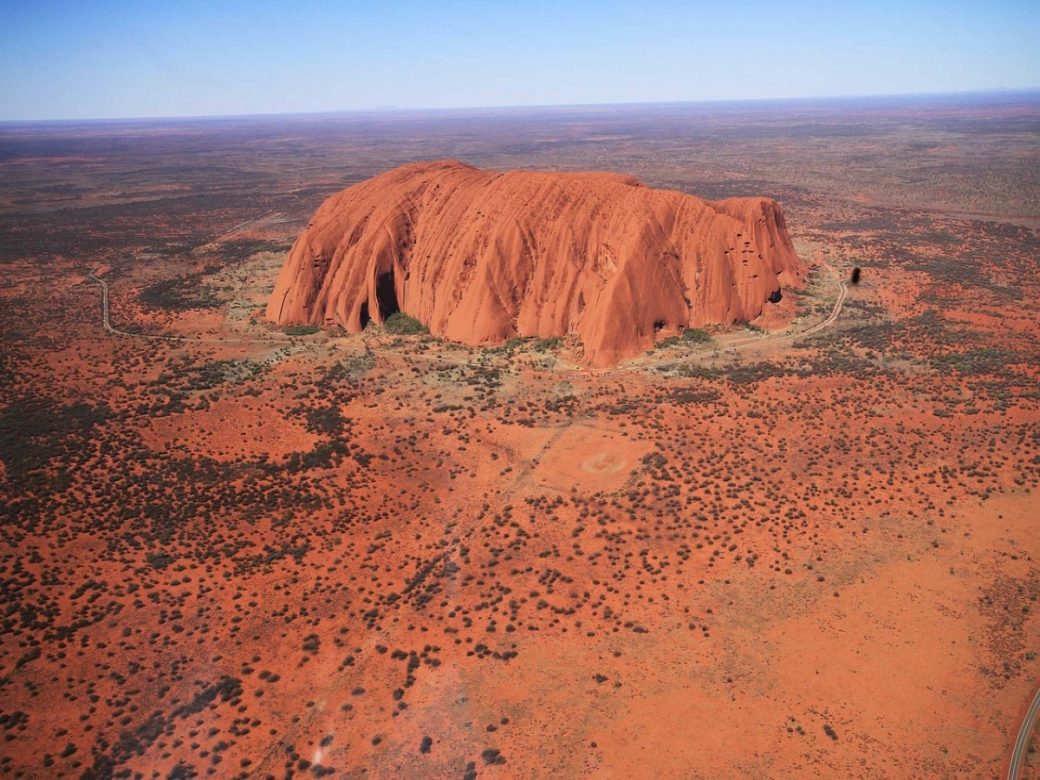 If you’re thinking of a weekend getaways to the Red Centre Australia, hold on to your hats – there’s a lot in store for you to explore.

From vast stretches of canyon to natural hot springs and waterholes, as well as a whole lot of incredibly stark desert scenery besides, the Red Centre has heaps of natural credentials.

Couple that with the potential to learn more about Aboriginal history, beliefs, and culture, see ancient and contemporary Aboriginal art, and see how this land has been connected with humans for millennia, and the Red Centre shapes up to be not just one of the most intrepid, but also one of the most important places to visit in Australia.

We are members of the Booking.com and Airbnb affiliate programs. If you decide to book a property, please do so through one of our links so we can earn a small commission. This goes towards the running costs of this site.

What is the ‘Red Centre’?

The Red Centre is one of the wildest places to visit in the whole of Australia. While the coastal regions of this vast continent are relatively busy with people, much of the rest of the country is not.

An estimated 85% of Australia’s population lives within 50 kilometres of the coast, making the country one of the most urbanised in the world. The rest is, well, the Outback.

Right in the middle of it all is the Red Centre, also referred to as Central Australia.This region of arid land makes up some of the most remote in the nation and is called the Red Centre as the soil and rocks are very red! So remote that even up until the late 20th century, there were Aboriginal populations here who had not been identified.

At the centre of it all is the most famous of all Australian landmarks, Uluru. As globally renowned and amazing as Uluru is, however, there is much more to the Red Centre than the world’s most famous rock.

How to get to the Red Centre, Australia

The Red Centre Australia is within a three-hour flight from most east and south coast cities of Australia and the airlines fly into Alice Springs or Conellan Airport near Uluru.

Typically there are flights from Melbourne, Sydney, Perth, Adelaide, Brisbane and Cairns with daily flights in winter and fewer in summer.

Driving to the Red Centre

Driving is one of the most popular ways to explore the Red Centre as it enables people to explore the vast landscapes and traverse the huge distances between towns.

Driving to the red centre is obviously not something that can be done on a single weekend but it is possible to pick up a car from Alice Springs or Conellan airports and explore parts of the region over short time frames.

If you already live in Alice Springs it is possible to visit many parts of the Red Centre as a weekend escape. Uluru is a 6-hour drive from Alice Springs so its doable albeit a bit of a stretch.

There are also a number of bus companies that service the area, most notably AAT Kings and Greyhound.

Visiting the Red Centre by train

The iconic luxury train The Ghan travels right through the Red Centre on its way from Adelaide to Darwin and return. Generally, it does this once a week year-round expect mid-Dec to mid-January with additional scheduling in April to October.

Offering Platinum and Gold Class sleepers as well as a lounge and restaurant The Ghan stops at Alice Springs and Manguri and it is possible to do a day trip to Uluru. Sit back and watch the Red Centre go by in absolute luxury!

When to visit the Red Centre

The Red Centre is quite incredible year round. However, the weather in Central Australia does vary a lot between seasons and it’s worth understanding how.

The best time to come is between May and September, when the maximum temperature is between 20°C and 30°C.

There is also little rain and the temperature means long walks and hikes are pleasant and safe to do.

Overnight temperatures drop quite drastically at this time of year so be sure to pack some warm clothes as well.

August and September are usually the best months to see wildflowers in bloom and the wildlife is quite active too.

From October to March temperatures can be very hot, with daytime temperatures regularly exceeding 35°C. This is also storm season which can bring welcome rain of an afternoon and fill the various waterholes and waterfalls across the region.

During Summer you will need to be well prepared with plenty of water, sunscreen and hiking equipment if you are planning on exploring offroad.

Be mindful of snakes and lizards such as the huge Perentie and be warned the flies in summer are quite something. A netted hat and insect repellant are mandatory! 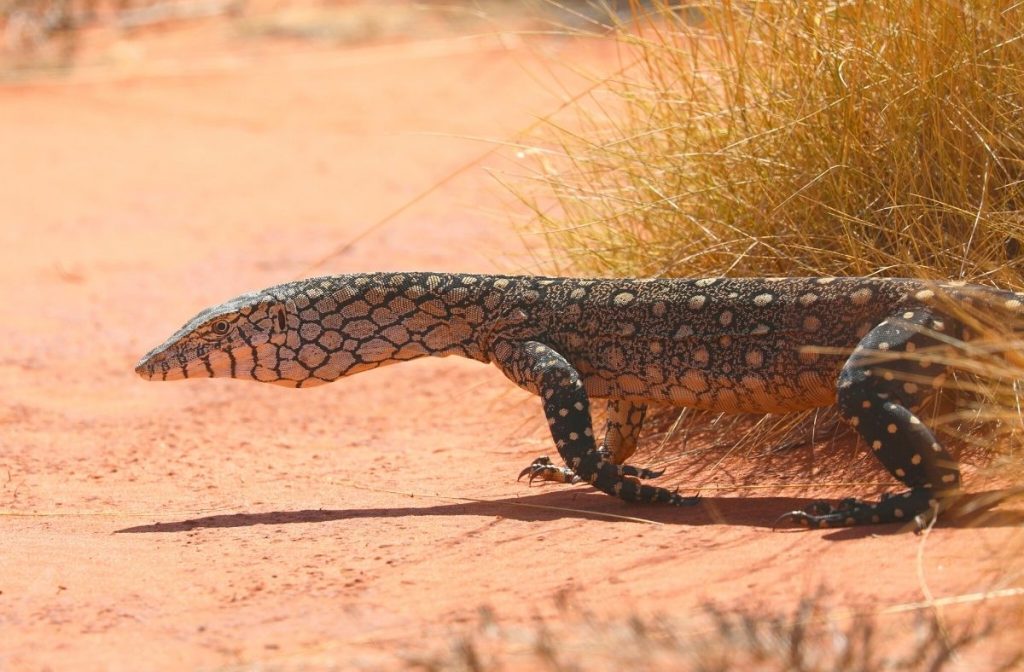 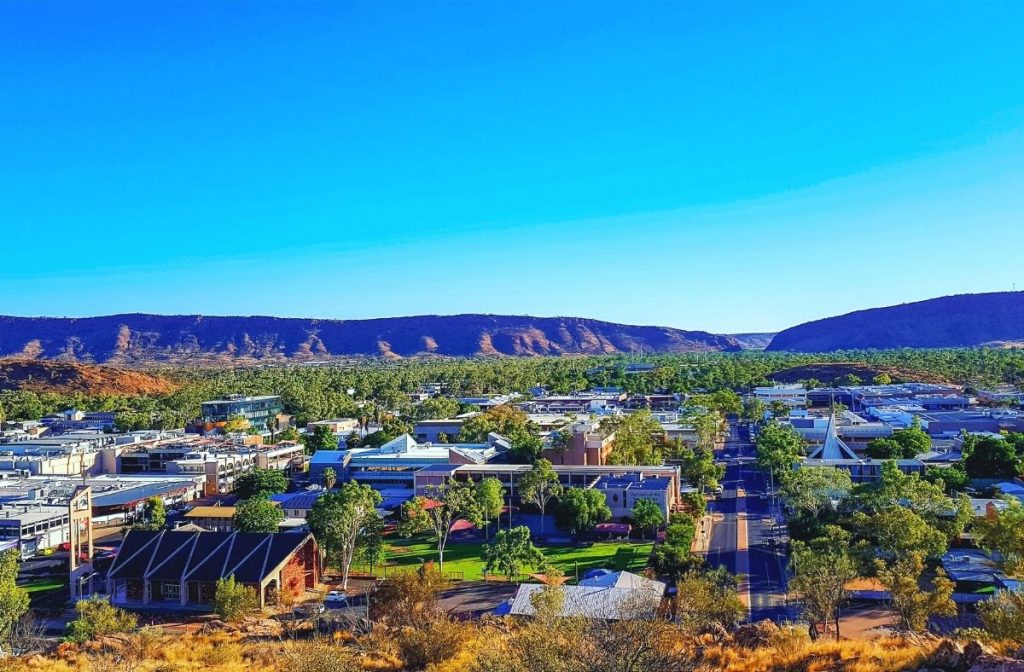 Pretty much in the centre of Australia, Alice Springs is surrounded by desert and boasts soaring temperatures.

But don’t worry; it’s not just hot and dry – it’s an interesting place that’s been home to Aboriginal people for thousands of years. The natural credentials are strong, too, with the surrounding area known for its waterholes, gorges, and mountains.

Modern-day Alice Springs is a mix of European and Aboriginal culture, which can be found in the numerous art galleries and museums spread around the town. There are also events put on throughout the year that help visitors get to grips with one of the world’s oldest surviving cultures.

Many people use Alice Springs as a jumping-off point for exploring the rest of the Red Centre, as it’s got everything a town needs to prepare you for adventure. It’s been that way for a long time, with the Overland Telegraph Line making a stop here back in the day – you can still see the preserved 1870s buildings dedicated to it.

Alice certainly has its own unique personality, making it a fun place to spend the day, unearthing what these ochre lands have to offer.

You’ll find everything from something adventurous like riding a camel in the desert to taking a stroll through the Alice Springs Desert Park to see the native flora and fauna of Central Australia.

For a refreshing dip in a waterhole, you could head to the Tjoritja West MacDonnell National Park, where you’ll find heaps of waterholes. It’s a good one for hikers who want to get into the ancient landscape on its many trails, too.

There’s also the Eastern MacDonnell Ranges, home to some of Central Australia’s most quintessential Outback scenery.

Where to stay in Alice Springs

Accommodation in Alice Springs is fairly limited with no 5-star hotels although the Crowne Plaza Lasseters and Quest Alice Springs are both very good.

For something a little different Ooraminna Homestead has a real outback vibe happening or Haveli Blue is a great outback apartment surrounded by desert and an array of wildlife. 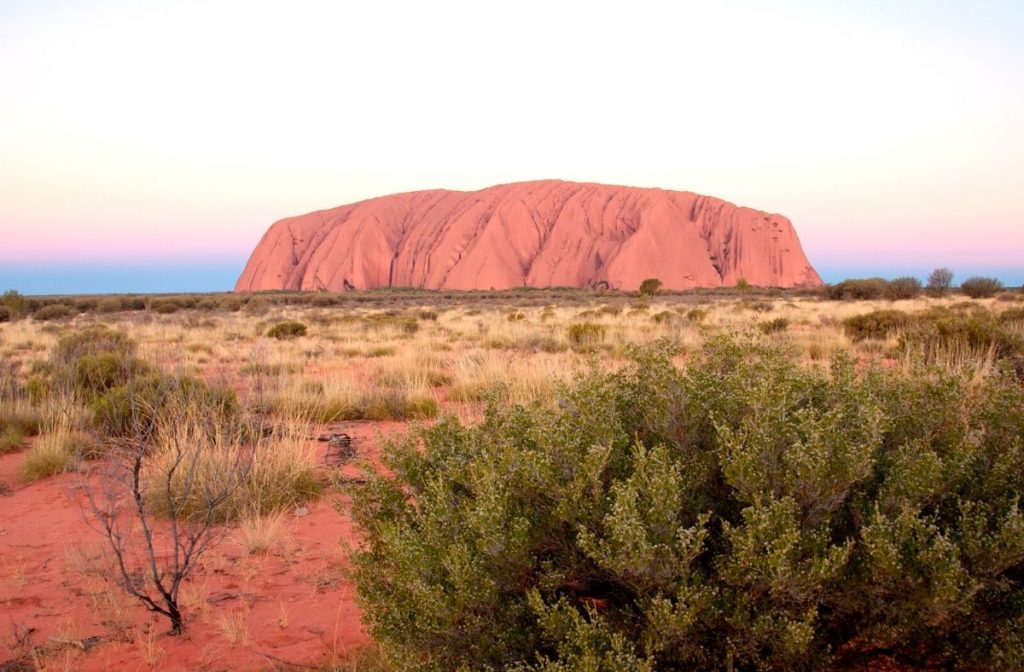 Uluru – formerly known as Ayers Rock – has to be one of the most famous land formations in the world. In terms of how striking and instantly recognisable it is, Uluru is up there with big-hitters like the Grand Canyon and should be seen at least once in your life. It’s also recognised as “Australia’s most natural icon”.

Around 20 kilometres from Uluru is Kata Tjuta – also known as Olgas. Though less internationally renowned, this collection of domed rock formations is also an impressive sight. Both structures are found in the Uluru-Kata Tjuta National Park, around 440 kilometres southwest of Alice Springs and encompassing a vast area of 1,326 square kilometres.

The area is understandably recognised as a UNESCO World Heritage Site.

Both Uluru and Kata Tjuta are important for Aboriginal people – and both were formed around 350 million years ago. The local people, Anangu, are the traditional landowners of the national park.

This large red rock has much more to it than its size, but that in itself is very impressive. The “Rock,” as it is also known, boasts a circumference of 9.4 kilometres, and most of it is actually buried underground.

The rest rises 348 metres above ground, making it a stark sight among the surrounding plains.

One of the most beautiful aspects of Uluru is the fact that it changes colour depending on the position of the sun; it can appear to be anything from pink to dusky purple – the colour depends on the season, too.

If you want to see Uluru, learn about this incredible sight, and really get a feel for it, then the best way to do this is to go on a guided tour around the rock.

Kata Tjuta is also fascinating. Made up of 36 domes of varying sizes, the highest is Mt Olga, which stands at 1,066 metres above sea level.

It’s a sacred spot that, according to local tradition, is related to powerful knowledge, with many legends associated with it; these include one of the Great Snake King, Wanambi, who lives at the summit.

The Uluru-Kata Tjuta Cultural Centre, owned by the Anangu people, is another place where you can learn about the area and its lengthy history. It’s a great spot to learn more about Aboriginal Dreamtime, too. 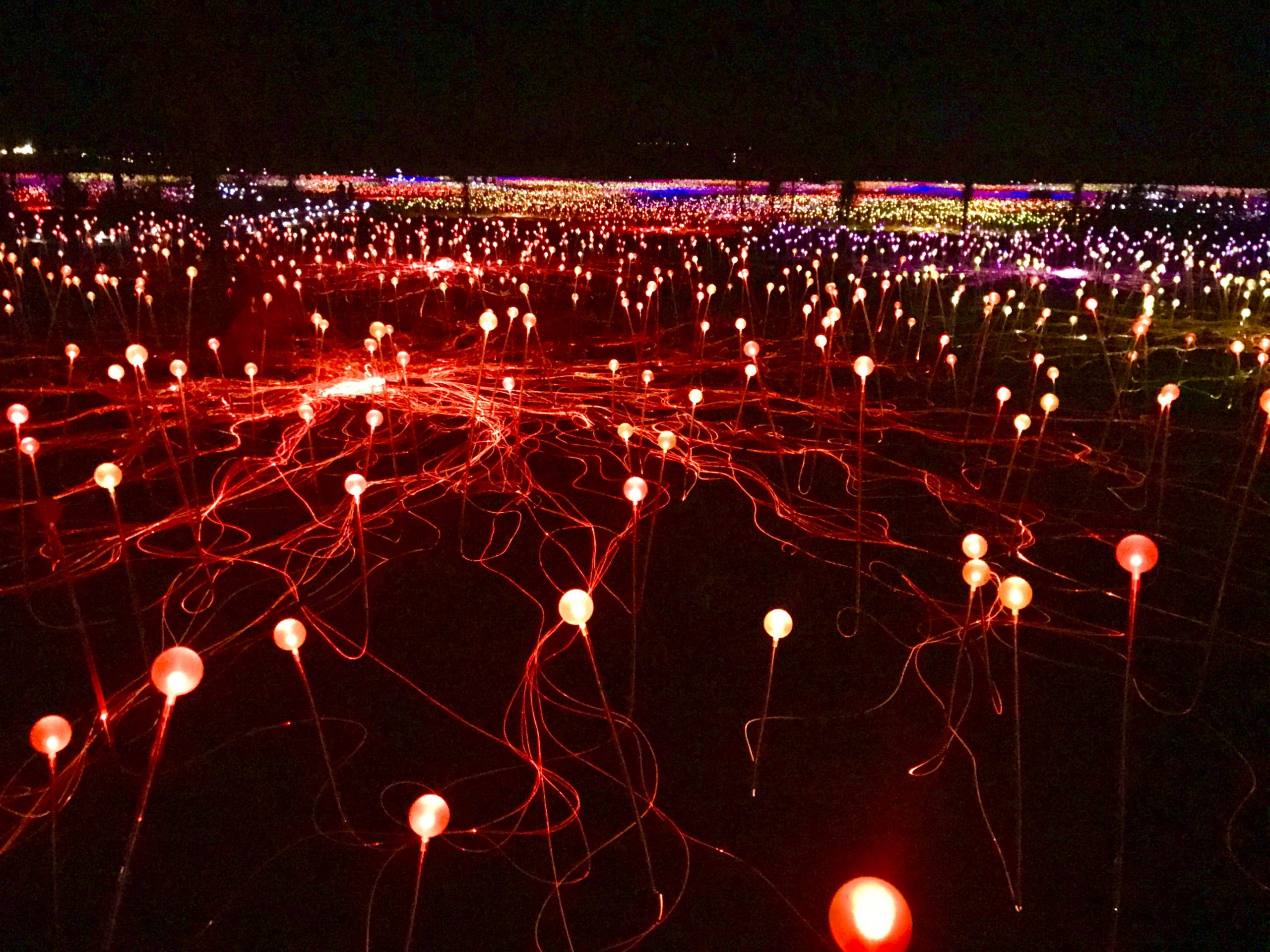 Where to stay for Uluru

All accommodation for Uluru is in the nearby township of Yulara apart from the 6-star Longitude 131 nearby.

Sails in the Desert is a very comfortable 4-star hotel with good facilities while the Emu Walk apartments are slightly bigger but a little more isolated. The Lost Camel Hotel is a small, funky hotel with the best pool area of the choices. 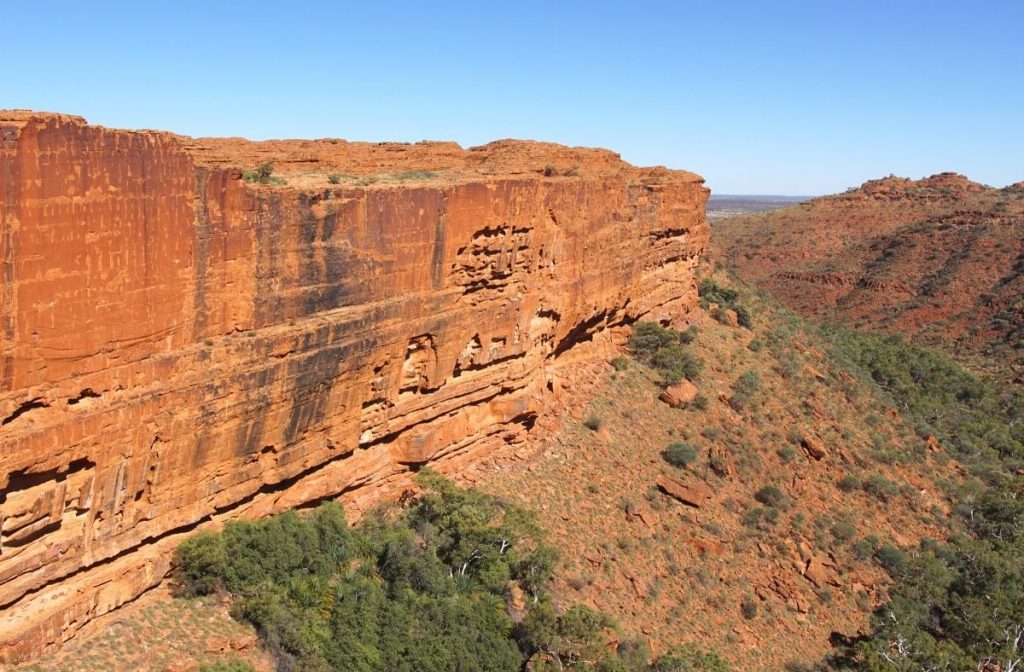 Kings Canyon is an impressive slice of canyon that makes up one of the best weekend getaways to the Red Centre. Located 323 kilometres southwest of Alice Springs, located within the Watarrka National Park, it’s certainly a sight to see.

The walls of Kings Canyon can be up to 100 metres high, having been carved out over millions of years by the waters of Kings Creek. In fact, it’s thought that this valley itself was formed around 400 million years ago.

Part of the gorge is actually a sacred site for the Luritja Aboriginal people, who have inhabited the area for more than 20,000 years. The land still plays a vital role in the culture and beliefs of the people. You can learn more about this on a tour of Kings Canyon, which is a great way to experience it.

Although it might seem at first glance like an arid sandstone landscape, there’s an abundance of nature to be found around the canyon. This includes over 600 species of native plants and animals.

There are three trails around the Kings Canyon that you can try out for yourself. One of these traces its way along the bottom of the gorge, another loops around the top of the canyon, while the third – much longer – is a 22-kilometre track running to Kathleen Springs.

Where to stay in Kings Canyon

As it’s over a 3 drive to Kings Canyon from Uluru it is a good idea to spend a night when you get there especially if taking a hire car.

There is really only two choices when it comes to accommodation, Kings Canyon Resort and Kings Creek Station who have bush tents.

Want to save this article? Why not Pin it! 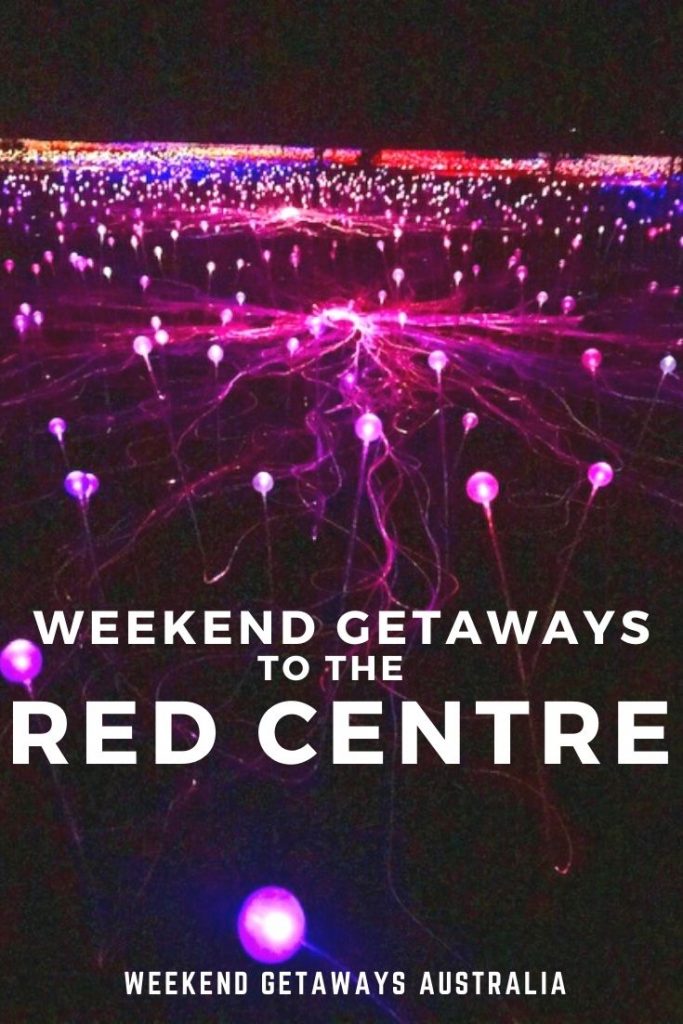 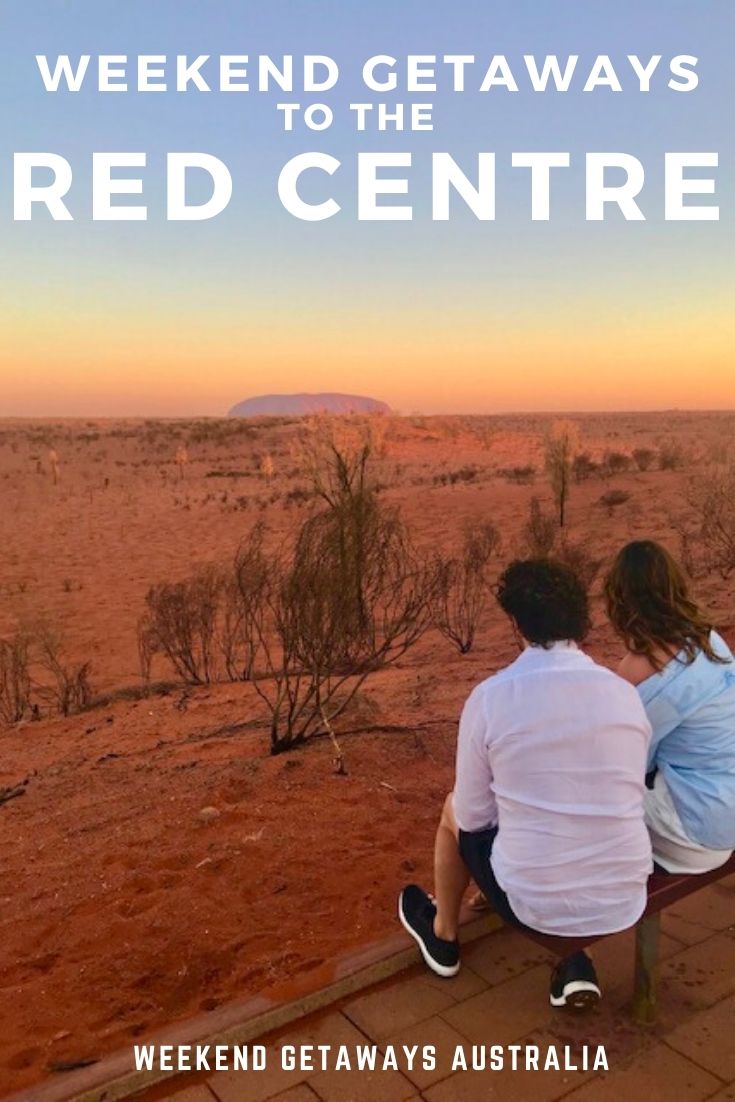 Weekend Getaways and Day Trips from the Gold Coast 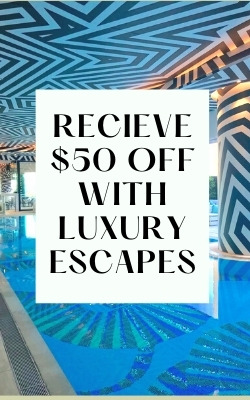